“The old will die and the young will forget”

These are the words attributed to Israeli Prime Minister David Ben-Gurion. He was referring to Palestinian refugees and assuring his fellow Zionists that Palestinians would never try to return to their homes. 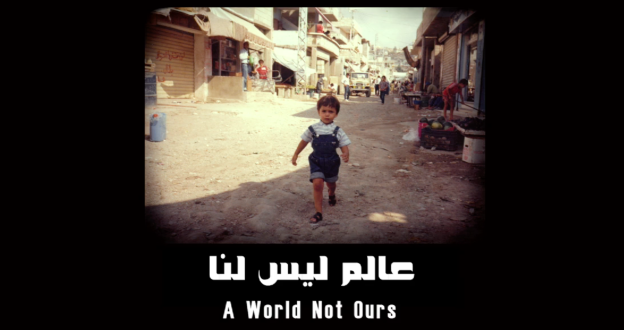 In the documentary film “A World Not Ours,” filmmaker Mahdi Fleifel shows us that this statement is certainly untrue. The young Palestinians are now old refugees and they still hold on to the idea that Palestine will once again be their home. The young Palestinians however, are trapped in a sort of limbo. Being stateless is their lifestyle, and they only become nationals of a country when the FIFA World cup comes around every four years.

Fleifel’s film is sentimental and takes a very different approach to documenting the refugee crisis. A very personal approach given that some of his own family is still trapped within one kilometer of Ain el-Hilweh; the refugee camp home to over 70 thousand people in the south of Lebanon. 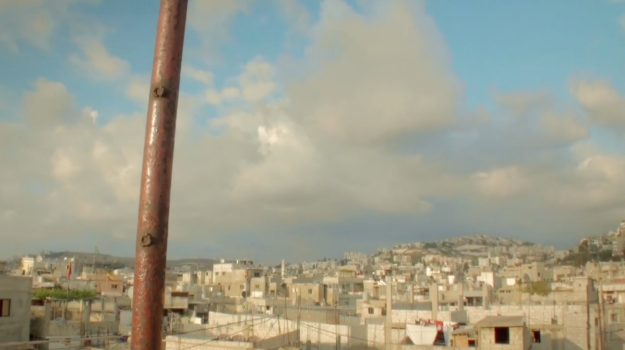 “To me, going to Ain el-Hilweh was better than going to Disneyland” remarks Fleifel in a voice-over. He says that it took him years to realize that the people in the camp were not there by choice. Through old home footage of children playing football in the streets, and celebrating the FIFA World Cup, he outlines his skewed childhood views and contrasts them with footage of the Palestine-Israeli conflict and the disillusionment of those who are trapped at the camp.

He interviews his friends, uncle, and grandfather, which in turn humanizes the faceless statistics about the plight of the refugees. His friend Abu-Eyad puts our everyday conflict into perspective, when he remarks that he would like to “go on a mission’ and blow himself up, because he sees no future for himself – trapped in a place where his everyday life has absolutely no meaning. 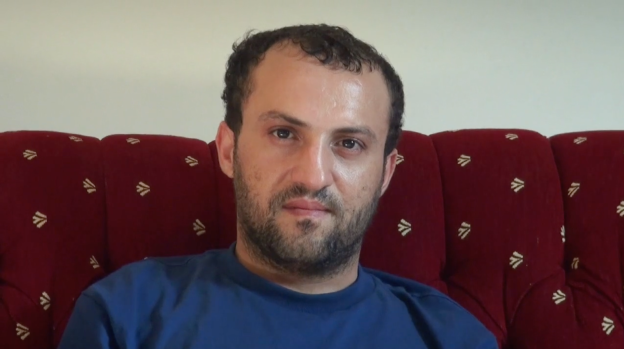 “Palestinians really fucked us over, I wish Israel would just massacre us all…” says Abu-Eyad while contemplating his future.

This film was filled with contrasts. The music was upbeat, yet the feeling inside the camp was one of helplessness. Is this how human life should work? They belong to no state so they are not allowed to live a fruitful life? The immediate answer should be no. That is not however, how thousands upon thousands of refugees view their life. Just like Abu-Eyad, they see no future, and they see no meaning.

You can watch the trailer here. Also, don’t hesitate to comment, or contact me to let me know what you think!

From a mental issue, to a race problem. From a simple life, to activist leaders. The Blood is at The Doorstep is not an arbitrary title; it is spoken in this thought-provoking documentary in a moment of peaceful protest by Nate Hamilton; younger brother of Dontre Hamilton, whose death and aftermath is explored by the Milwaukee-based filmmaker, Erik Ljung.

On April 30th, 2014, Dontre Hamilton was taking a rest in Red Arrow Park, right in front of a Starbucks, in the city of Milwaukee. Dontre was 31 years old when he was shot 14 times by Milwaukee police officer Christopher Manney; and his death, was just the beginning of a life changing experience for Hamilton’s family.

Not too far from the Hamilton home, filmmaker Erik Ljung heard about the incident, and three weeks later he was with Dontre’s family, documenting their search for answers and justice. 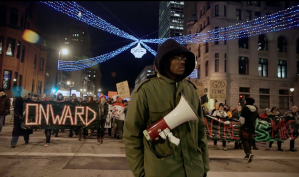 Ljung then went on to spend the next three years alongside the Hamilton family. Chronicling their journey as they sought out justice for their lost son and their lives became more intertwined with a national movement taking place. For Dontre’s younger brother, who said he led a “simple life” before his brother was killed; the change meant becoming the founder and leader of the movement “Coalition for Justice.” As the film developed, we saw the conversation about Dontre’s death go from a mental health issue – the police claimed Dontre’s schizophrenia was the main cause that killed him – to a racial issue. When Michael Brown is shot dead three months later in Ferguson the search for justice intensified in Milwaukee, and the accusations for racial profiling by the police grew stronger.

“It’s stunning to me that there is not a social problem in America that can’t be solved by more training for the police.” – Ed Flynn

Ed Flynn being interviewed by the press

Erik frequently includes the voice of Milwaukee chief of police, Ed Flynn. He never accepted the racial argument for Dontre’s death; but he did illuminate a very real issue when he pointed out the irony in having the police be responsible for all of America’s historical issues.

The filmmaker found a way to give this film an honest look towards a very human issue happening in the country. The film was not propagandistic, nor was it angry. It made no attempt to be controversial. It was, in fact, a very fair approach to documentary, which allowed all sides to have a voice.

Ultimately, Eric Ljung’s first feature documentary looked at how the community was galvanized after the shooting, and how it attempted to find a place for healing among the chaos and growing tensions.

You can watch the trailer here!

See you soon Vail #momentosunicos ⛷🎿
🤩 ❄️ 🎿
**insert cool caption about the views on the mountain** #vail
Under the rainbow tree 🌈 🌲
Happy Friday peeps! Christmas, I need you, hurry up and get here. 🎄 —- 📸 and blazer by @baronasinred
Thanks Miami for the invite to spend Thanksgiving with you, happy to be back in the heat 🌴😉 #cheers #happythanksgiving
Gearing up for Grand Prix Sunday #formula1austin #f1paddockclub 🏎
Wachu gonna do when they come for you? xoxo 💋- Con la misma esencia desde el inicio #notplayingaround 😉 . . . — Which one speaks to you the most? — by @mariawilsonphoto
Ughh. 🌊 Feeling the nostalgia of my Caribbean breeze and ocean mist - not to mention actual worry free days #easylife #takemeback #superthrowback